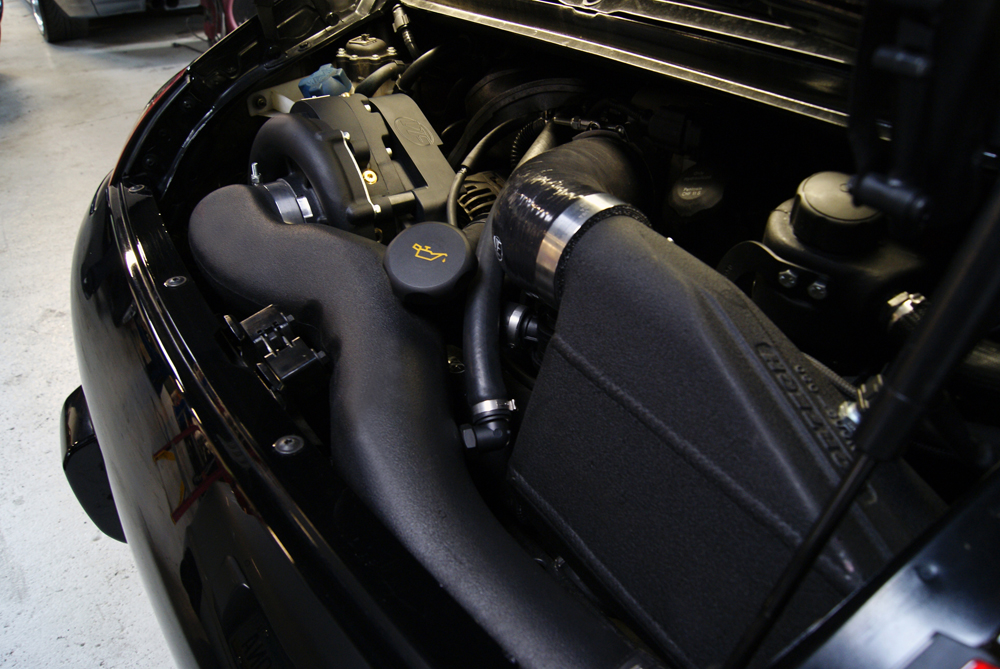 The VF-Engineering designers set about designing the billet supercharger mounting bracket with CAD software creating solid models of parts to be CNC manufactured. The bracket was designed to utilize OEM bolt patterns and requires no alteration or relocation of any engine parts to be fitted. Made from 6061-T6 aircraft grade aluminum the bracket mounts to factory machined surface points on the aluminum engine block for a precision fit.

A V3 model Si-Trim Vortech Engineering supercharger unit was chosen after consultation with Vortech engineers and matching the engine’s volumetric efficiency with supercharger compressor maps. The V3 unit contains helical-cut gears for super quite performance – virtually silent with the engine compartment lid closed. The V3 supercharger has a 20psi and 1000cfm maximum capacity and is an over-engineered part for this Porsche application which is geared to produce a conservative 6psi in the engine’s intake manifold.

The fastidious design of the supercharger bracket, positions the belt driven supercharger to maintain use of the OEM spring loaded belt tensioner. The serpentine belt routing was designed to maintain the correct rotation of all the accessories and maintain optimal pulley wrap for maximum friction.

The Vortech air to water intercooler (charge cooler) was integrated into the tight fit engine bay as means of reducing charged induction (boost) temperatures. Lower charge temperatures promote engine safety by reducing knock and improving the quality of the combustion cycle. Air charge (boost) from the supercharger is directed through the chargecooler core before entering the throttle body. The cooler core contains isolated channels circulating with water from a separate self contained system cooled by its own radiator. VF-Engineering integrated a Porsche OEM front radiator and front bumper vents into the kit. Water is circulated by means of an added OEM Bosch water pump through OEM Good Year water lines. Intake air temperatures in the manifold were measured to be approx 140 deg F even with ‘spirited’ driving at 118 deg F ambient temperatures in Arizona desert conditions mid-Summer. This dramatic drop in charge temperature helps the 997 create consistent power. For added safety the chargecooler is designed to perform continuously whilst the ignition is on.

With all major components in place, VF-Engineering set about shaping the air ducts from the filter to the throttle body. The intake pipe is specially tuned for its air flow characteristics and pressure relief system. Production pipes are manufactured from a lightweight molded high temperature polymer. The thermal insulating properties of the plastic pipes prevent heat transfer into the cooled charged air traveling inside them.

Engine management software was by written by VF with extensive testing performed on independent test cars. Multiple factors such as charge air temperatures, ignition timing, fuel trims, maps and injector performance were taken into account. The Carrera 2 and 4 test vehicles were extensively dynoed on the VF 4WD Mustang and monitored for wide band air fuel ratios at load levels often greater than would be experienced on the road. The results are an increase of 150 horsepower and 90 ft.lbs of fully usable torque.

Software is programmed into your ECU using the “Hex-Flash” programming cable. You can program your ECU yourself through the OBD2 connector on your dashboard with software sent to you by email. This tool also allows you to read and clear ecu codes.

[Not a valid template]

“Just a heads up the car is buttoned up. I drove it today and wow. You guys make some impressive stuff.”

Disclaimer-
This product is not compliant with the California Air Resource Board and not for use on public roads in California.
This applies to any aftermarket product that does not display a CARB EO#. Power ratings are subject to conditions and dynomometer model used.

The new www.VFE1.com web store is live now. Click on through to learn more about our VF Engineering Supercharger Systems and HEX Tuning Software applications, with images, dyno plots, videos, and much more.

All Products on this website are NOT compliant with the California Air Resource Board (CARB) and Environmental Protection Agency (EPA) and not for use on public roads. This applies to any aftermarket product that does not display a CARB EO#. Power ratings are subject to conditions and dynamometer model used.

We are happy to assist with any inquiries. Give us a call or send a quick email today!